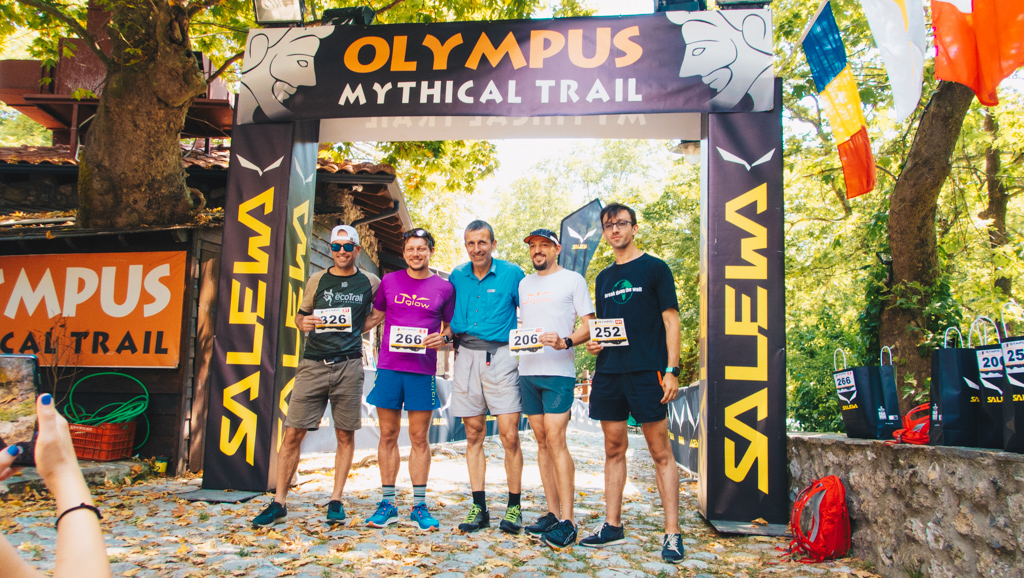 Running 100k in the mountains is harder.

Watching someone you love run 100k in the mountains might turn out to be one of the hardest points of view in trail racing.

Travelling 850km from Bucharest to Litochoro during a global pandemic so that we only get to crew for him for a few couple of minutes in total during the race can not be explained.

They all start at 0km, fresh and full of joy, eager to capitalize on those hard training sessions, cracking jokes like a fat kid jokes about diet coke on his cheat day. 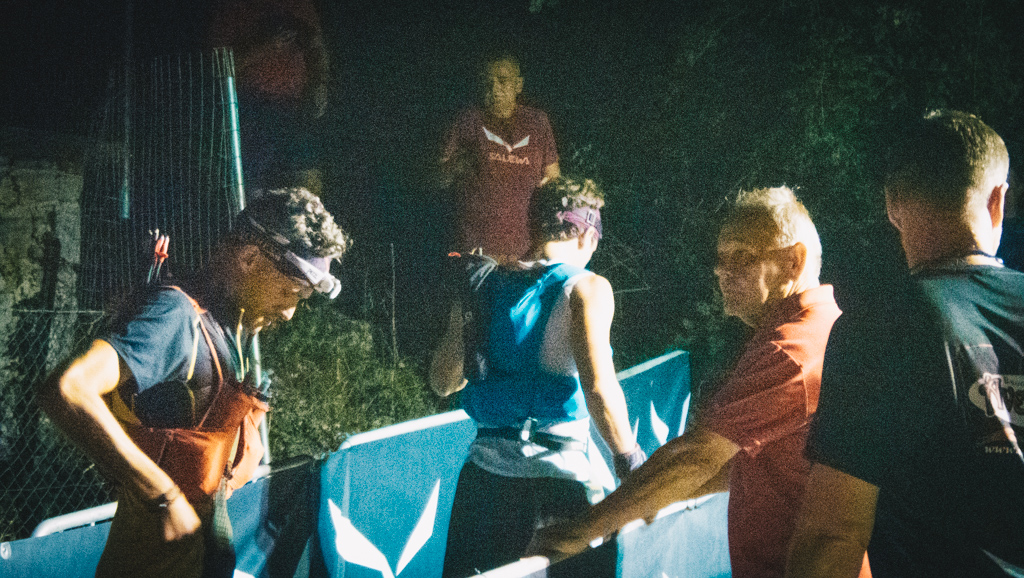 50k – first checkpoint. He lost his smile, his forehead is almost paralyzed in a frown state and he smells. Bad. Nobody cares.

I need orange juice and salt! he goes.

Where’s the OJ? Where’s the salt? Nothing seems to be where it should be. We definitely fucked up, nothing’s right. It already feels like an eternity until we pass the OJ and salt and he goes almost screaming “Time!”. One brief look at the countdown, 39s. Not great, not terrible.

Maria cleans his legs in an almost biblical scenery: he stays chill as we are too afraid to look him in the eyes.

I mastered the art of making a bag out a buff and one shoe lace which I fill with ice. He takes it with no remorse around his neck. I just hope he doesn’t want to change shoes in the next CP.

We empty the trash pocket, refill with gels and isotonics and off he goes.

10min15s between him and Fotis.

We stop for coffee and refuel the car. We’re happy it turned out good in the end and that he’s looking for a good fight. The race is just starting. 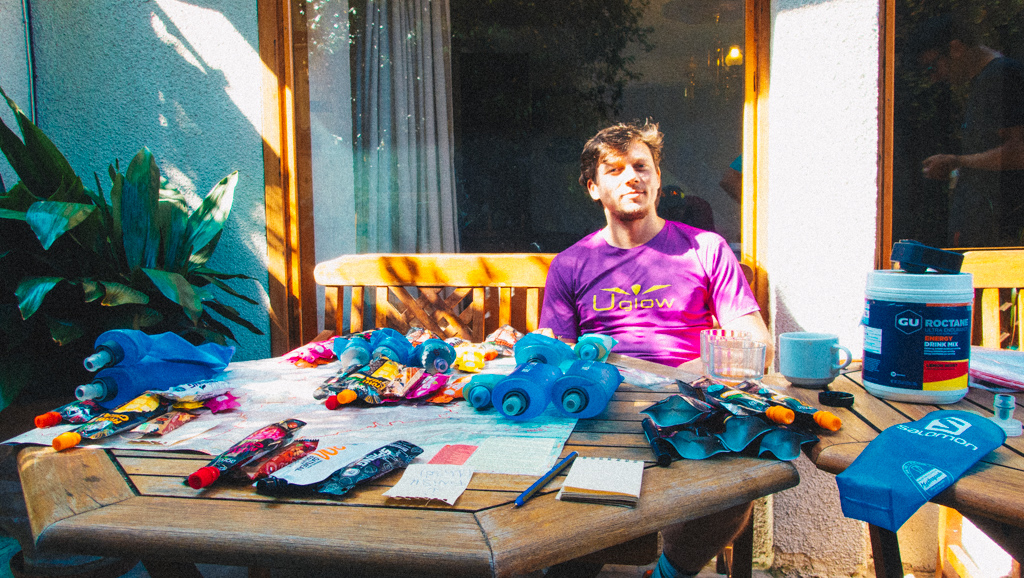 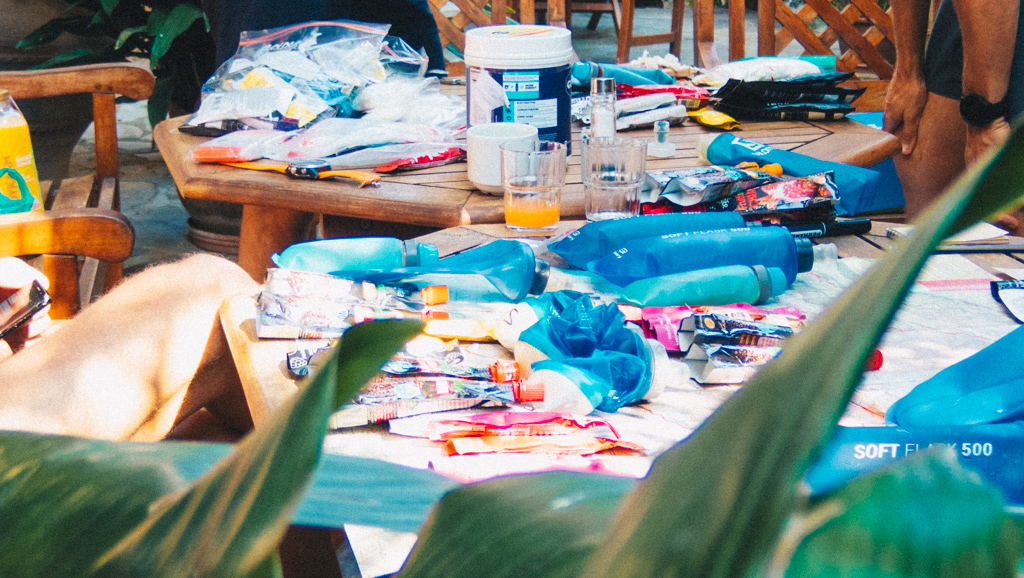 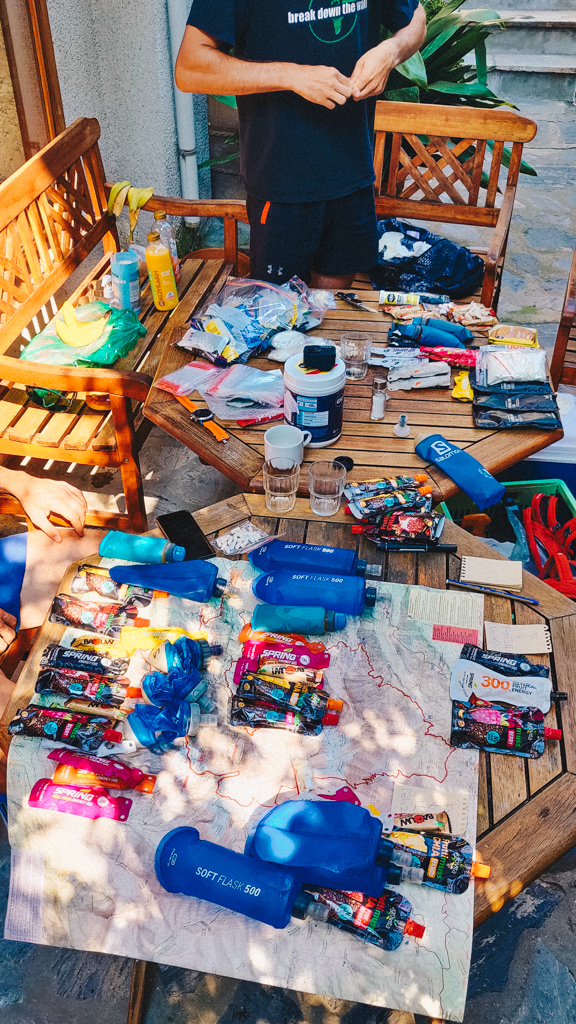 We dwell deep into the woods after 1hr+ drive and try to make sense out of a pin dropped one night before on my laptop, a not working Gmaps (no coverage) and a physical map Lazaros signed for him before the race. My pulse skyrockets as my brain passes through:

What if we miss the CP?

What if he passed already?

What if we will never find the CP?

What if we will be the sole responsible persons for his 3rd DNF in a row?

Could he turn PRO in DNFing? Is there even such a thing?

I keep these to myself. No need to alarm Maria, gotta seem like we have a clue of what we’re doing. We go up and down two mountain roads until we finally realize we’ve been there all along. Amateurs, he’d say.

Fotis comes in. His back hurts. I am not happy to see anyone in pain and I don’t take satisfaction in anyone’s suffering, it’s an awful sight to see. He decides to continue the race as his coach massages him with Theragun massager.

Never interrupt your enemy while he is making a mistake I say to myself as Napoleon said.

He comes in. He looks tired.

Can’t get the isotonic in he goes and I feel the world is trembling below my feet. Last time I heard that was in GC. DNF. Fuck.

There’s a special bond he shares with Maria of true, unaltered, romantic love. She empowers him and there’s a major gap between before and after they interact. Nice.

More ice. Ice down the pants, in his boxer shorts, in the pocket around the waist. Ice ice baby starts repeating in my head.

He grabs another can of coke and leaves. I follow him along for a couple of hundred meters as he gulps on the coke and to retrieve the can. He feels and looks good.

11min30s between him and Fotis but the race starts now.

We pack and leave. I start to wonder the time difference between him and the 3rd place but it should be 10min+ as he didn’t come in until we left. The online tracking system is a disaster to makes sense out of and both me and Maria settle on he’s far enough.

More driving, more jokes, more music I don’t understand from Maria’s playlist. The type of artists I’ve seen on the posters from Summer Well Festival but had no clue about them. I’m a good car companion, you let me drive my way, you’ll handle the music. We both mind our own business.

We start towards the last checkpoint and fatigue starts kicking in. I have no idea what time it is, how long he’s been racing, how long we’ve been up and when will it end. But I know we must keep our shit together. She keeps updating on his Facebook post, people don’t understand the reality of the race as he keeps switching between 2nd and 6th place. Again, fucked up tracking system, couldn’t understand shit from it. GSM coverage goes out again.

We have more than 1hr before his ETA once we got there.

I ask for a greek coffee from the only restaurant there and I fall asleep on a bench before I even get a chance to take a sip.  My back hurts. I twist and turn in a weird state of being asleep and awaken by the pain caused by the bench. A few years ago I felt asleep in a train station for hours, what’s this pain I feel? After 10min of light sleep, I feel a little bit better. Maria kept going around looking for cell coverage. Poor signal, barely managed a refresh.

Fotis comes in. No support crew. He gulps down his throat some rice and he dips his cap into the water bucket. He looks fucking fresh. I don’t mean that in a he looked good considering he had 90k on board and more than 6000m of positive elevation way. No, I mean as if he switched bodies with an identical one and just started the race. Fotis CP time: 40s. Forty seconds.

Motherfucking motherfucker fuckery fuck fuck fuuuuuuuck! I go so that only Maria can barely hear me.

He comes in after 12min(…)sec. He looks tired. I try and lie to him that Fotis is this and Fotis is that hoping he can flip his hunter switch. He doesn’t seem to have much fight left inside and decides he’s not going to hunt him anymore.

It’s good enough he says and accepts his state of affairs.

You’re still the first to lose I go, trying to motivate him. But it’s hell and back to recover 12min so late into the race. We let the matters settle, no need to argue.

He takes deep breaths while trying to focus on being present even though he stares blindly into thin air. A couple of minutes pass and he gets up. The last stretch is coming.

The last stretch being 15k with 600m+ still to go. Not quite a walk in the (natural) park of Mount Olympus.

We gather whatever we had laying around, exchange some friendly talks with another support crew and try to put our money whether Robert will catch Fotis or not. They go with Hell, yeah! but I’m not so sure about that. I settle for a classic we’ll see.

It’s almost funny how organized and tidy we started this, from crackers in zip lock bags, sweet gels to the left, salty ones to the right, orange juice in this crate to water here in this transparent PET bottle, water with added salt in the other one and so on, now everything’s a giant mess: used towels covered in mud, used flasks with sticky tops, open gels that still had some left in and spilled out. Our trunk seems like the perfect representation of how you start an ultra and how you finish it. If you finish it after all.

It’s like getting your teeth whitened and then someone tosses a brick at your face but instead of dodging, you try and take a huge bite out of it. 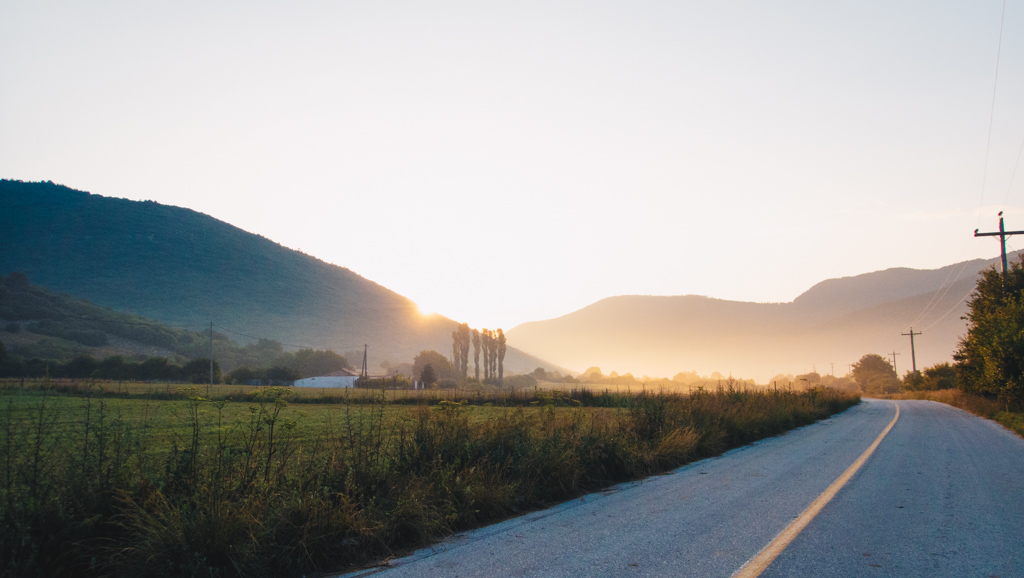 We park and head towards the finish line with a weird pressure around us. We can’t keep quiet and small talk our way through the cracking heat of a hot Greek summer day.

I feel bad. I feel bad because how much I want him to feel good, not just good enough.

We get to the finish line. I decide to go and meet him a few hundred meters before the finish and film his finish.

I have a lot of mixed feeling around the scenery: one year ago, I did this race, I was happy to finish it, it had a huge impact on me. But no time for mourning.

What if he did make up the 12min gap?

What if I miss him?

It struck me as a lightning bolt once I saw Fotis more than 30min before his ETA. 30 + 12min gap = 42min before him? What the fuck? I laugh and say to myself dude definitely took a shortcut but settle for the fact that my math was wrong all along.

A couple of minutes pass and Maria calls me: Fotis took a wrong turn and he missed the course. He will be disqualified! 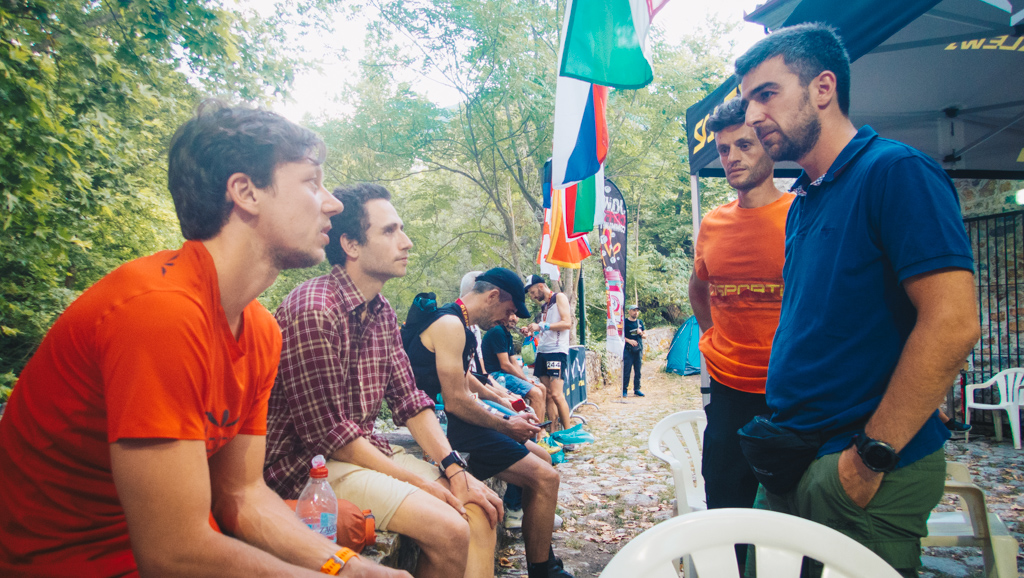 After 12hrs+ of racing, Fotis took a wrong turn due to his previous experience with the course (it seems there’s another competition which he did or won and follows the route he took) and also, due to one volunteer who misguided him. I swear to God, it wasn’t us who misguided him.

I hang up and start running towards where he should come from hoping he would push harder knowing the current situation. I end up at a crossroads and can not remember which way the course goes. I look at my watch hoping to have the course pre-loaded but there’s no good luck – I didn’t.

He comes charging like a raging bull on the last downhill and I have to sprint to close on to him.

-Step on it, the record is yours!

-He missed the course!

I found out later he got the same info in the last (official) CP where one of the volunteers told him that he was the first one to arrive. 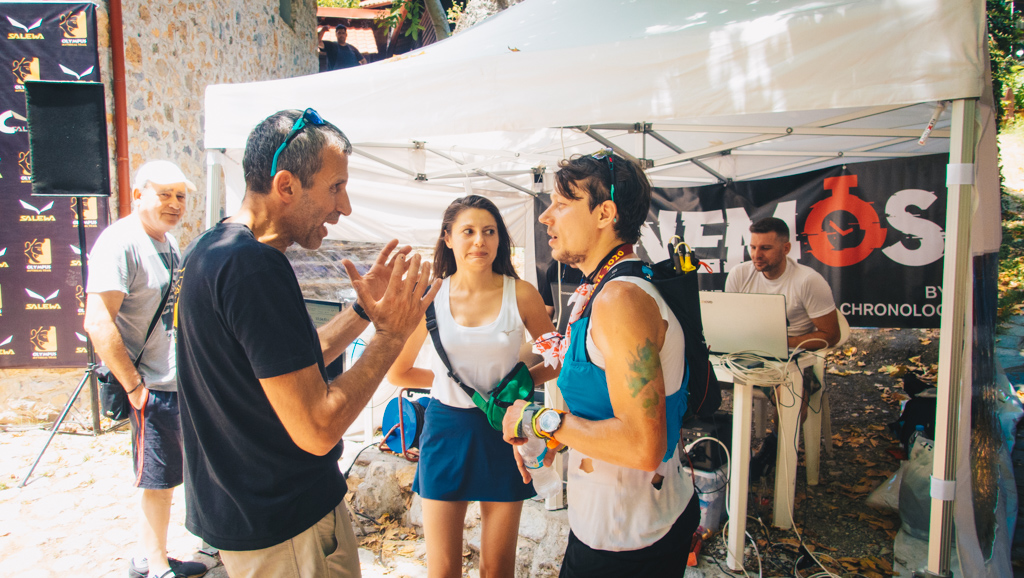 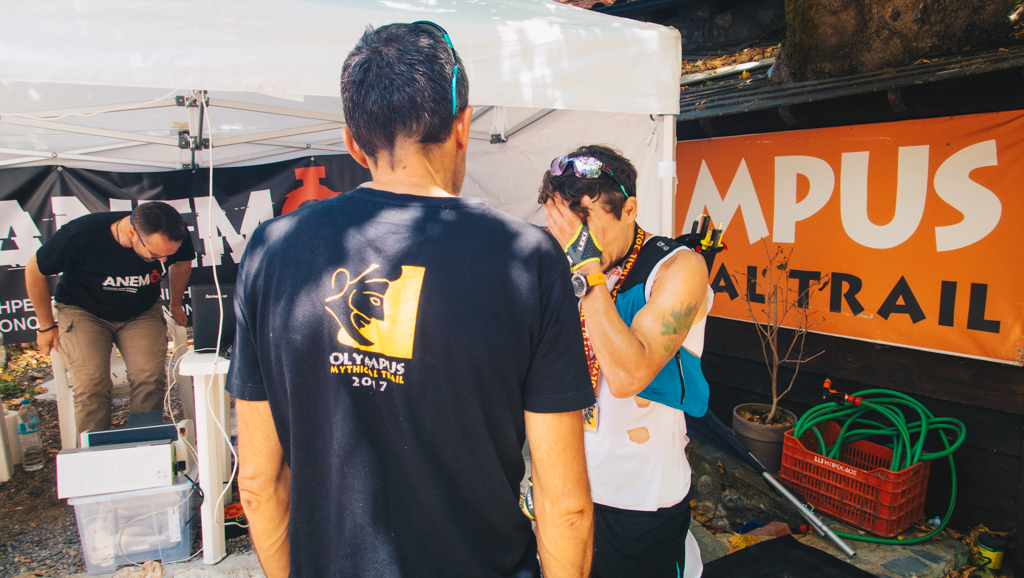 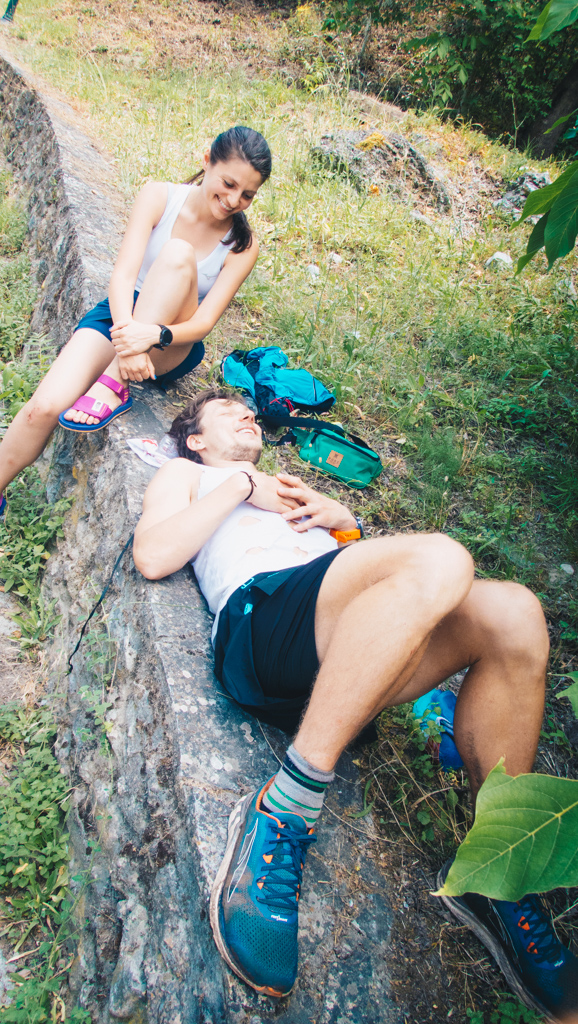 His name is Robert Hajnal, current holder of the OMT100k course record @ 13h34min51s. Read his side of the story here. 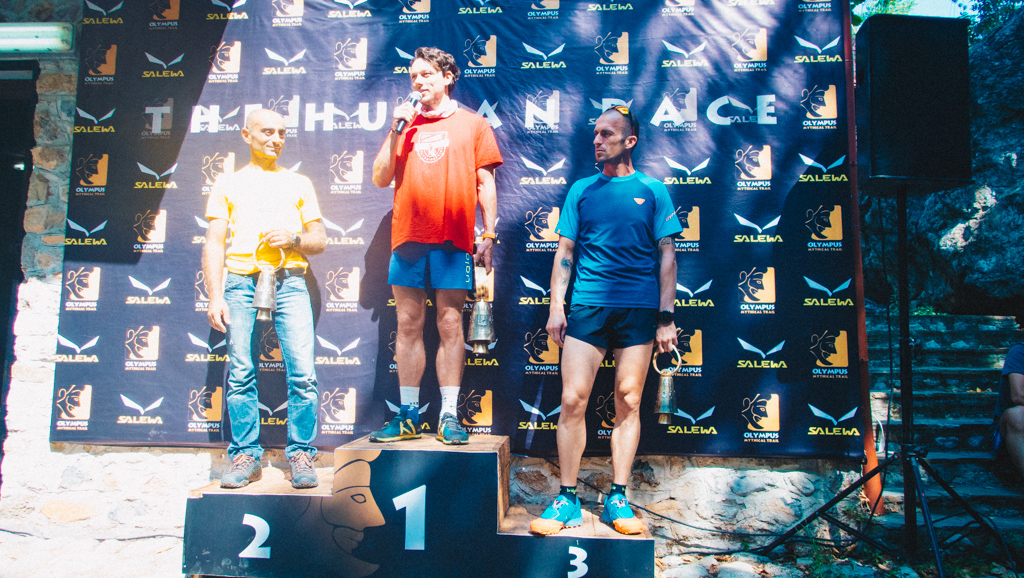